Ok, danke. Hört sich ja interssant an^^
He writes for the living. She rights for the dead.

It’s been 12 years since Yuusuke Godai, as Kamen Rider Kuuga, defeated the unidentified lifeforms called Grongi, and disappeared. Ichijou is still trying to search for the remains of the Grongi Tribe. Recently, rumors about a white warrior surfaced in the web. This reminds Ichijou of Godai.
http://www.jefusion.com/2012/11/synopsi ... ealed.html

There is an old rumor going around that Joe Odagiri doesn't want to be remembered as Kamen Rider Kuuga. In my recent lurk in 4chan's /m/ board, there is a post that compiles facts that Odagiri likes his role as Kuuga.

Odagiri is still extremly close with the staff and cast of Kamen Rider Kuuga that he even went to the wedding of Wakana Aoi, who played Midori, his on-screen little sister in the show and made a speech. He was also on board to do a Kuuga movie years after the show ended.

It is said that he is willing to do anything for Kamen Rider Kuuga Producer Shigenori Takatera. A good example is his cameo appearance in Daimajin Kanon as Fuuga. Coming from the same producer, the rumor about Odagiri trying to forget his past as a Kamen Rider is complete BS.

He was once asked on Bakusho Mondai why they erased Kuuga from his acting history on his profile to which Odagiri replied, "It's not erased. Don't say such unpleasant things like that!" He also attended a 2008 Kamen Rider Kuuga cast and crew reunion.

Lastly, most of the bad things Odagiri said about tokusatsu were mostly before Kuuga. It is said that there is a video taken last year that he talked about Rider in a press conference for a movie.

Kamen Rider Kuuga will be released this June 28. The novel is written by Naruhisa Arakawa.
http://www.orendsrange.com/2013/06/rema ... ovels.html 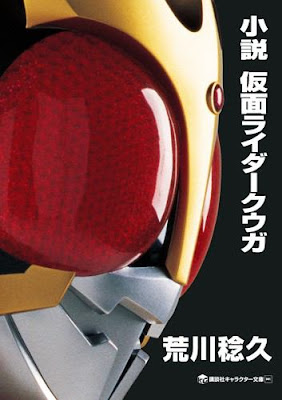 The novel sequel of Kamen Rider Kuuga had finally been released after many delays. The novel follows the events 13 years after the TV series ended. This time, it centers around Kaoru Ichijo, and Mika Natsume and the prototype Arcle.

Prior to the TV series, Professor Natsume discovers the Kuuga Arcle, including the prototype one, and he included it in his notes. Eventually, he fell victim from one of the Grongi attacks. 10 years afters (3 years before the novel starts), Mika Natsume, his daughter, found the notes.

The prototype Arcle was created earlier than Kuuga's but is incomplete because of lack of the Amadam, which causes the user to go berserk. The previous user went crazy and the belt was sealed inside the Coffin of Darkness (Kuuga Arcle was sealed was labeled with Coffin of Light).

After sighting a few Grongi, she goes to the ruins where the prototype Arcle is. She wore the belt and transforms to Kuuga (but with some minor differences, like smaller horns). Similar to the Kuuga, her first form is white. The black form's eyes flashes between red and black, then completely black when she loses control to it.

She fights an unnamed Grongi in her white form, but it's killed by a different one before she can finish it off. Later she fights a jellyfish Grongi, Rider Kicks it and is shocked by the explosion she caused.
She eventually faces a lion Grongi, where she goes from white to black out of rage.

Similar to the ability used by Kuuga in the TV series, she can use steel frames to change them into cannons. She is seen shooting a huge beam out of Tokyo Tower. Yusuke Godai shows up and stops her. He used BeatChaser 3000 and Gouram at one point to stop Mika from getting berserk. The novel ends with the belt still in her.

Odagiri: I really hated it while doing it back then.

Interviewer: You hated it?!

Odagiri: Yeah. It was not a project I liked but still had passed the audition. I really didn't know what to do. It was either giving up acting by leaving my agency or just hang in there and do it. Those were the only options I had.

Odagiri: Yes. However, the producer, who is a very interesting and funny person, said that they wanted to "destroy the image that Kamen Rider had until then". I then thought that was something I was good at. And I guess that became my motivation.


This doesn't contradict what was previously reported in this blog since it was revealed that he is still close with the staff and crew of the series and attended some of the show reunions. Most of Odagiri's thoughts about Kamen Rider and tokusatsu in general are before working on Kuuga. I guess he started to change his mind while he was working on the show. 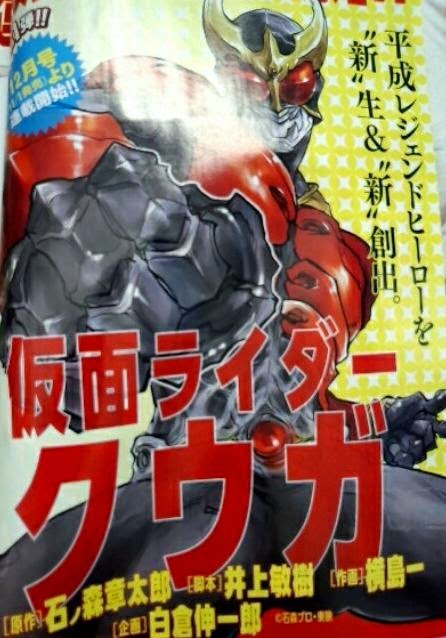 The November issue of HERO'S monthly magazine announced that a Kamen Rider Kuuga manga will be serialized in the said magazine.