Meteor Galaxy's buttons has symbols for three planets, the planets Mars, Jupiter and Saturn. Pushing the button upwards and pressing the red button will give Meteor attributes related to the said planet. Based on how I see it, Mars will give him fire punches, Jupiter will give him super strength and Saturn will give him the ability to throw energy rings.

Kamen Rider Fourze Magnet States (仮面ライダーフォーゼ マグネットステイツ) will be activated using the NS MagPhone, which uses the N Magnet Switch (#30) and the S Magnet Switch (#31) at full power. For Fourze to gain access in this form, he cuts his phone in half and insert the two parts of the Fourze Driver's Circle and Square slots.

With its full power, Fourze's head becomes larger and extends to his shoulders with two gun turrets on his shoulders. The orange Thermo Registyle becomes red on the right side and blue on the left side. Kamen Rider Fourze can use the two Magnet Modules mounted on his shoulders by using the Magnet Swtiches as a joystick to control it.

Want to wish upon the stars and be a Zodiarts? Bandai is about the release the Kamen Rider Fourze Zodiarts Switch this March 19, 2012! This device is often given by the Zodiac Zodiarts to unknown humans and gives them the power to transform into monsters called, Zodiarts.

DX Meteor Driver. The LED on Meteor Driver will change its colour when another Switch is inserted (Elek - Yellow/Gold, Fire - Red). To be released by end of December 2011.

DX Meteor Galaxy. It has LED on the touch panel. To be released by end of December. 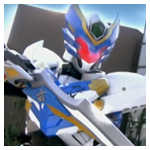 Aba der preis wundert mich echt. Oo Ist sehr billig
ハロー！アロー！森で会おう！
With open arms, I take this journey | I see a future, a world full of hope
I walk this road with courage and strong will | Through storm, I will succeed with joy in my heart
Nach oben